In 2011 I was living and working in Madrid, Spain, at an internet company my brother had created along with some longtime Spanish friends. We had company Blackberries, or Crackberries as the popular blog appropriately referred to them. In the long Madrid evenings, our phones were continually running out of juice, so I usually carried an extra battery pack with me. One night when we were out, an exec put a 50 Euro note bounty on anyone with a full Blackberry battery — I pulled out my spare, and he paid up. This wasn't the first time this problem had struck one of us; charging BlackBerries in extreme situations was one of the recurring themes of our late-night shenanigans. There had to be a better way to keep phones charged on the go.

The smartphone was much more than just a phone; it was the tool of the 21st century, as perhaps the sword or the pen had been in centuries past. It was an increasingly powerful multi-tool that allowed its users to connect with and reshape the world from anywhere. But they needed a lot of juice. 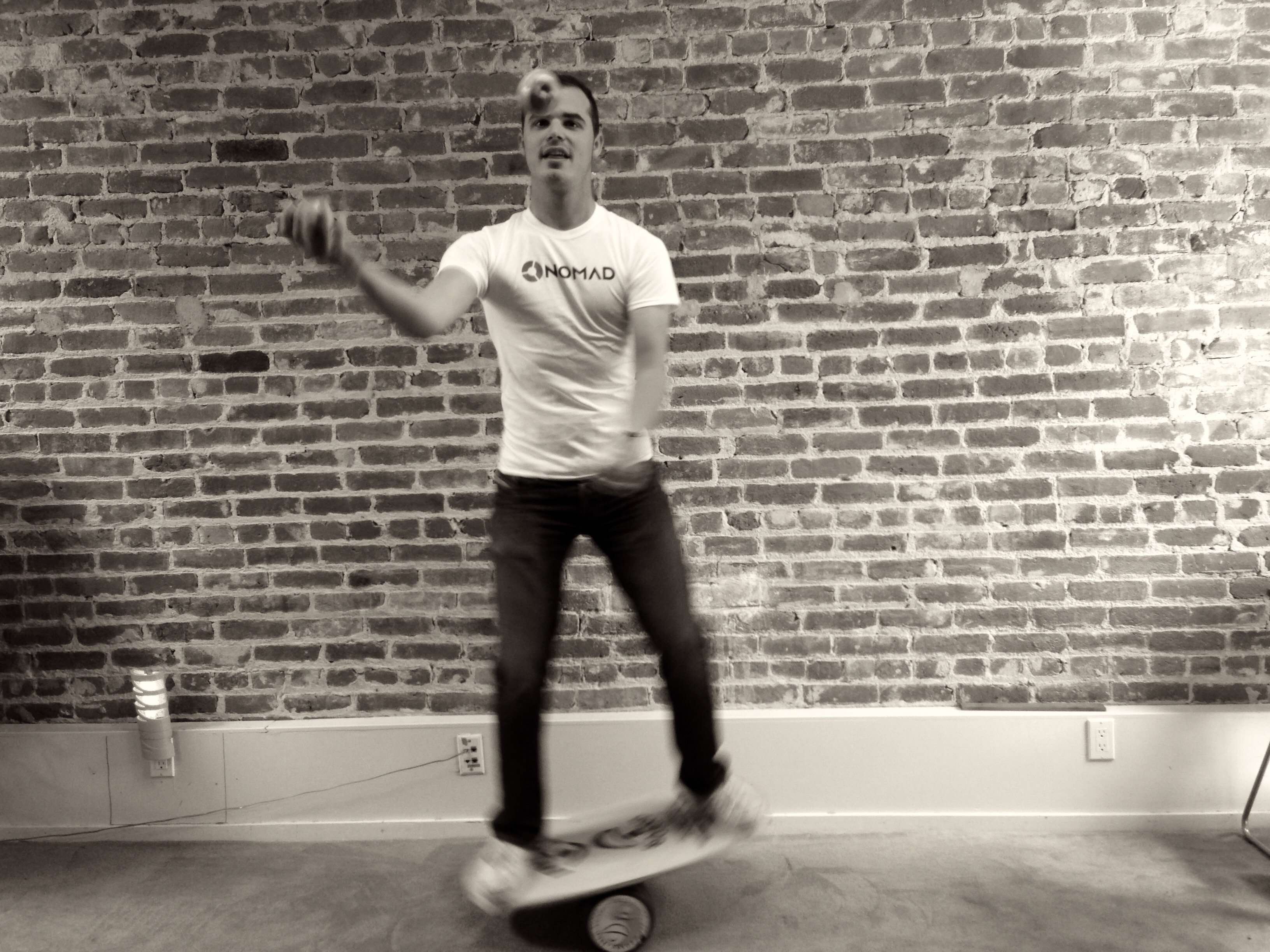 Not long after the Blackberry incident, I was at Madrid's Scientific Police Department, taking my fingerprints to formalize my working visa for a long term stay. My plans changed when I instead learned that I had unknowingly been previously served a one-year Schengen-area interdiction of entry for overstaying my initial visit by 30 days, which I was currently in violation of. I was whisked through a crowded immigration detention center only to be graciously dropped off at a subway station by a sympathetic police officer who admonished me not to travel anywhere other than directly back to the US.

In the coming months, while my colleagues would visit European hotspots on long weekends, I would rent a car and tour Iberia. If they were going to Copenhagen, I was visiting Cádiz or Córdoba. Through these trips, I developed a keen taste for the Spanish dish gazpacho and the firm belief that America was missing out on this nutritious, blended vegetable drink. Back in Madrid, my free time was spent between the unlikely combo of sketching out portable charging cables and honing in on the best gazpacho recipes — none of which ever seemed to live up to that of a Spaniard's mother. I would bring blind gazpacho taste tests to the office, and ask the same people about their portable charging needs. Indeed, it was a gazpacho taste-tester from the mobile web apps team who suggested the cable be the size of a credit card so it could fit in your wallet, like the way a SIM card is packaged. Like any good idea, I dismissed it at first, only to realize later the brilliance of a USB cable sized and shaped like a credit card, a form factor already intimately familiar to us. Armed with these ideas, an insatiable desire to bring at least one of them about, and no safe chance of re-entry, I set on back to America, to my grandma's basement.

It really dawned on me then: The Smartphone had become the 21st century equivalent of the sword. It was a tool that allowed its user to reshape the world from anywhere, as long as it stayed charged.

I began visiting farmers' markets and talking with commercial kitchens by day, all the while trying to figure out how to build a consumer electronic device by night — something I knew so little about. Fortunately, I wasn't able to foresee the many challenges and roadblocks to come. Ignorance, paired with a heck of a lot of persistence, can be a good thing. I linked up with a product designer, Adam, whose early renderings of the concept gave it a breath of reality: this thing existed, at least a digital render of it did, and now we just had that pesky problem of figuring out how to make them. I tabled the gazpacho plans and shifted all focus to ChargeCard; the credit card shaped USB cable. My sister, Sophia, connected me up with Brian, a guy she'd met while working at the local mountaineering store. Brian was living on a boat in Santa Barbara Harbor. At the time, he was juggling a widely diverse handful of projects and interests, from satellite remote sensing data, film, and cinematography to graduate research on vegetation and hydrology. Brian was a voracious and talented soul, eager to dive into a project he, like I, was unqualified for, and give it his all.

I first met Brian while surfing on my birthday, where I caught my first wave. I told him with unending excitement about ChargeCard, yes; this little charger was a game-changer, period. And after some late-night sessions and a few too many bottles of Trader Joe's two-buck-chuck, I'd realized I'd connected with the partner I'd need to make this all a reality. Brian would become my true cofounder in this mission and has been an integral part of Nomad ever since, serving as the Head of Product, and much more, to this day. While drinking some cheap champagne on the deck of the boat in the Santa Barbara harbor during these early days, one of us, and I can't remember who blurted out ChargeKey, a key-shaped USB cable which would be the natural successor to ChargeCard. This was much more than just another portable USB cable; it was our transition from a Kickstarter project to Nomad, a brand focused on building minimalist tools for the modern Nomad. ChargeCard and ChargeKey were just the start.

After months of planning, late night internetting, handmade ugly, yet functional, prototypes, and sexy 3-D prints, we were finally ready to launch our Kickstarter. On the floor of my grandmother's den, we went live on July 18th, 2012. Two days later, Brian and I set off on a marketing road trip with the goal of some kind of viral publicity stunt of promoting ChargeCard in all 50 states, meeting backers-to-be on the road, and doing whatever it took to reach the minimum $50k funding goal (turns out we'd raise and need a heck of a lot more). We had even calculated the math of how many people we'd have to convert each per day to hit our goal and convinced ourselves we could canvass enough one on one commitments to hit our minimum target. 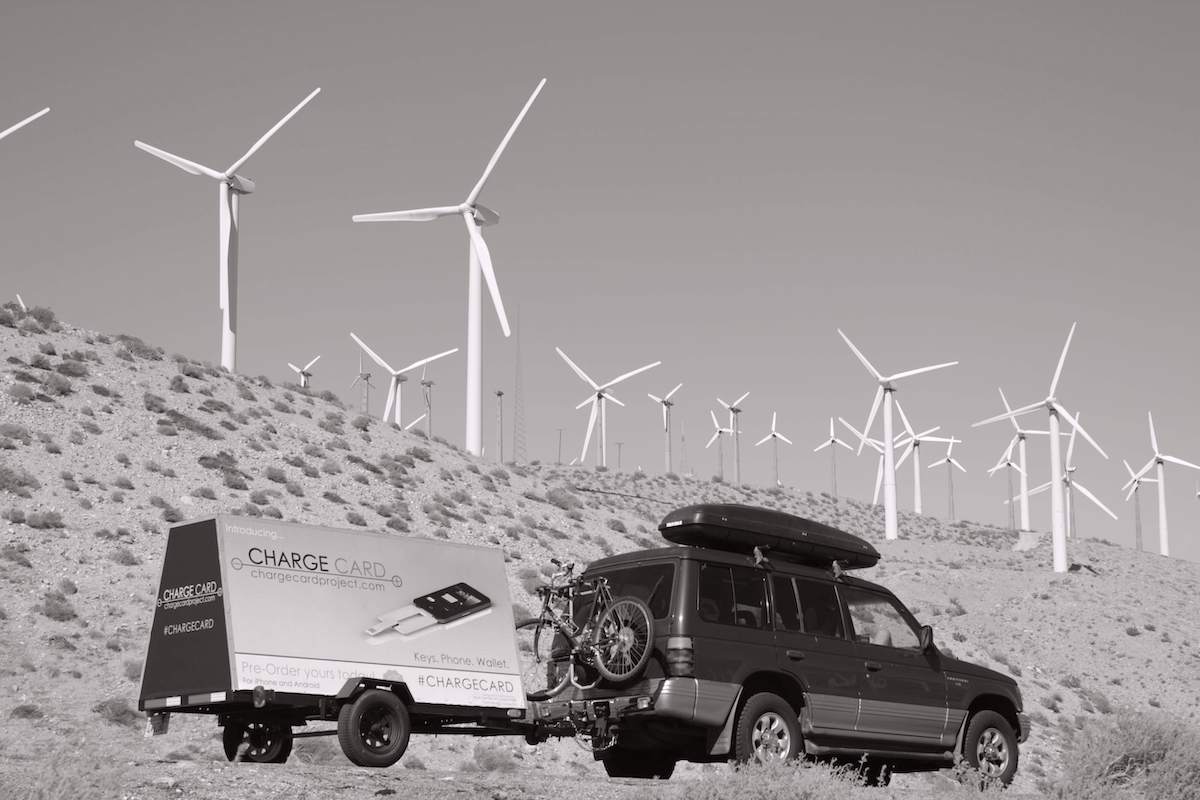 Our original plan was to take Brian's Mitsubishi Montero on a roadtrip across the country with our ChargeCard billboard/stealth camping trailer in tow. We set off across the Southwest and into the Rockies. There we were in Santa Fe, evangelizing ChargeCard to a father and son duo from Oklahoma wearing cowboy boots, hats, and bolas. While these interactions forced us to boil down our pitch, we soon realized the online press outreach we were also hammering from our tethered computers – one of us would drive while one would work from the makeshift bed in the back – was where actual virality was happening. 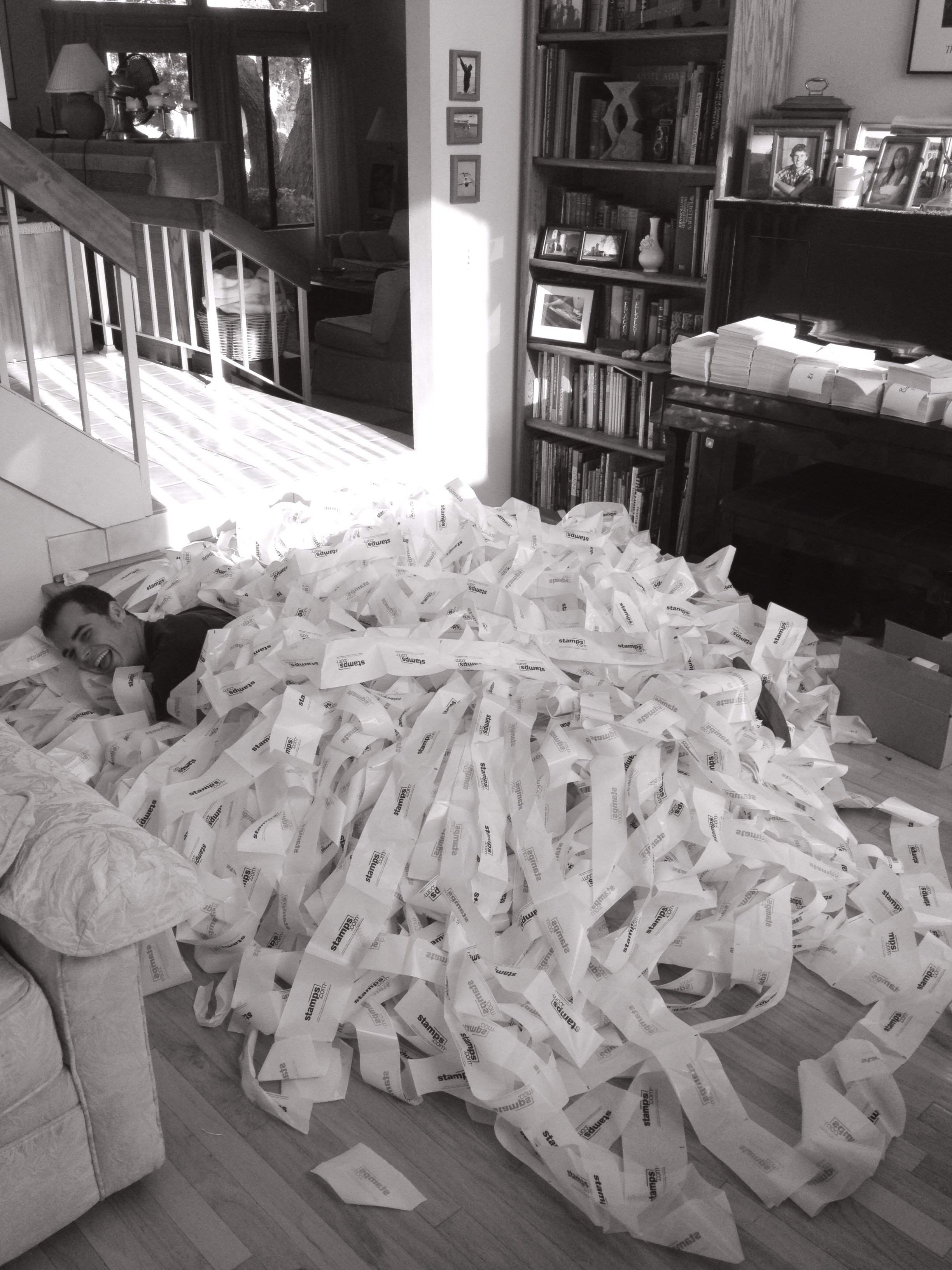 So we turned around and posted up in Aspen, working out of the mountain top lodge during the day (free wi-fi!), and urban-camping on the streets in the evening, while we eagerly strung together production of a consumer electronic device. We returned to California and posted up in Los Angeles near to where we manufactured the first few rounds of ChargeCards in the remnants of an industrial underbelly of Orange County. Orders kept coming in, and Brian and I were hustling to ship everything out of his parent's garage ourselves and with the help of some Chinese exchange students at the local business school who were looking for some old fashioned American garage startup experience. They showed up in luxury European and Japanese cars, a stark contrast to our busted Montero with over 200k miles on it.

I don't think the local post office had ever seen that many packages arrive in one day. We frequently depleted them of all their regular issue stamps, instead of shipping many of the first 8000 or so Kickstarter-backer units with rolls of wedding decor stamps they'd reluctantly summoned up. Over the next few months, we worked from Brian's parent's home in Agoura Hills, debuted at the first startup showcase at the Consumer Electronics Show, dubbed "Eureka Park," and took flight from Kickstarter to fledgling consumer electronics brand.

Want to learn more about our story? Continue reading the next chapter here.