It’s been eight years since we launched on Kickstarter, and a lot has changed since then. We started knowing almost nothing about building products, but driven by persistence, a tight-knit crew, and relentless trial and error, we’ve built up Nomad in true bootstrap form, and we've learned a heck of a lot along the way. While we can’t fit all the details here, we wanted to tell you a bit about how our story has unfolded. Read on for cofounder Brian Hahn’s account of the past eight years of Nomad. If you want to learn more about the history of Nomad, check out this post about our origins. In the spring of 2012, Noah and I met while surfing in Santa Barbara. We became friends and would stay up late scheming and swapping crazy business ideas on the back of an old boat I was living on. Noah had been pushing forward an idea to make a credit card-sized charging cable via a crowdfunding campaign, and I was intrigued. Our shared desire to do something different led us to quit our jobs, move into Noah’s grandma’s basement, and put all our energy into the Kickstarter campaign to launch our first product, ChargeCard. Fortunately, I already had some video skills which I put to use for our campaign video. The ChargeCard campaign ended up going well, but things quickly got real when we realized how hard it was to mass-produce a product.

We struggled with production, and, like many Kickstarter projects, we were months delayed. We had no engineering background, but through online tutorials and frequent visits to the LA-based factory we were working with, we learned how to turn our concept into reality. After an eight-month delay, we finally shipped out ChargeCard. With limited experience, we launch Nomad’s first Kickstarter project, ChargeCard. As we close out the campaign, the challenge of going from prototype to product sets in.Visit our Kickstarter page The challenges of going from prototype to mass production are many. Eight months behind our planned ship date, we start shipping ChargeCard. We pack up everything and head to the tech epicenter of San Francisco to build our team and grow Nomad.

We realize how expensive SF is and sublease a tiny attic from another tech company. Our entire shipping operation, desks and living situation is housed in the attic. 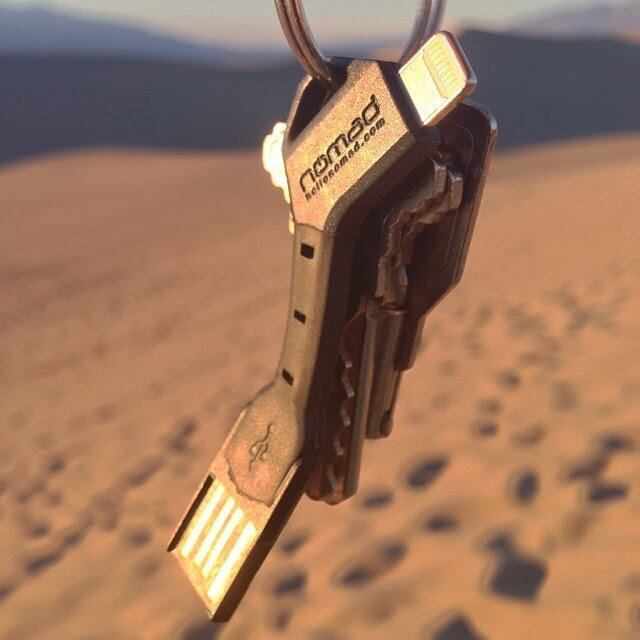 We launch our next product, ChargeKey, hitting 344% of our initial funding goal. At the same time, expenses begin to grow.Visit our Indiegogo page

We opened our Shopify website, and the sales continued to come in. In 2013 we moved to San Francisco to begin building our team, but we soon realized how expensive the city was and could only afford a tiny attic sublease from another tech company. We made the attic our combo home/office/warehouse. It was pure startup life with constant energy and hustle all around us.

Later that year, we launched our second product, ChargeKey and it too was a crowdfunding success. Our sales were solid, but the cost of running the business was also increasing. Though our revenue had grown a lot, we were too inexperienced to run a fifteen person company properly. Soon, we had nearly run out of cash. We had to make some hard decisions to keep Nomad alive. In February of 2015, we drastically slashed our expenses, moved back to the family house, cut non-essential costs, and somehow ran Nomad with a team of five. It was hard times, but it got us back to our roots.

We opened our Shopify website, and the sales continued to come in. In 2013 we moved to San Francisco to begin building our team, but we soon realized how expensive the city was and could only afford a tiny attic sublease from another tech company. We made the attic our combo home/office/warehouse. It was pure startup life with constant energy and hustle all around us.

Later that year, we launched our second product, ChargeKey and it too was a crowdfunding success. Our sales were solid, but the cost of running the business was also increasing. Though our revenue had grown a lot, we were too inexperienced to run a fifteen person company properly. Soon, we had nearly run out of cash. We had to make some hard decisions to keep Nomad alive. In February of 2015, we drastically slashed our expenses, moved back to the family house, cut non-essential costs, and somehow ran Nomad with a team of five. It was hard times, but it got us back to our roots. Due to rising costs and growing pains, we almost run out of cash. We decide to get back to basics and cut our team to five people, eliminate non-essential costs, and return to the garage in Santa Barbara. We refocus our efforts in the garage with a five person team. We start manufacturing accessories for the Apple Watch before it is even released. Things are steadier but we are still juggling cash flow and running lean. Every Friday, a new crisis appears. We dub this weekly phenomenon F*** You Fridays. We move into our first real office since San Francisco, an old woodshop in Santa Barbara's Funk Zone. The team starts to grow again.

Learn about our start up days here

We spent the next three years grinding away in the garage and basement with a small team and a lot of grit. We focused all our energy on becoming an early accessory manufacturer for the first Apple Watch. We saw it as our opportunity to stand out from the big players by aggressively building accessories for this little-supported product. It was not an easy three years. For tech accessory companies, summer sales tend to drop off as consumers spend more on vacations and less on gadgets. Unfortunately, we never had much free cash or credit available, making those summers particularly tricky.

Every Friday, we had to manage our bills down to the last dollar, hoping that there would be enough cash in the bank to keep going on Monday. We now fondly refer to these as “F*#& you Fridays”. For those three years, all we needed to do was survive until the next new iPhone would launch in September, bringing in much-needed sales. We just kept grinding it out and making it work. After three years, we were able to move to our first office since San Francisco, though it was a very funky office.

Our new office was in the former industrial zone of Santa Barbara. When we moved in, we had to spend an entire week cleaning the six-inch thick sawdust left behind by an old wood shop that had previously occupied our space. Even after all of our efforts, sawdust was still everywhere. Anytime someone would walk upstairs, dust would fall through the floorboards onto our desks below. It was a funky, dirty shed, but it was our shed, and we loved it. We took root here and thrived. While in our Funk Zone office, we launched some of our best products like Tile Power Pack, our first round of iPhone cases, and our Modern Horween Leather Apple Watch strap. Anything that can happen, does happen. Our office is hit by a microburst tornado, blowing the roof off. We return to the garage once more. At the same time, our biggest iPhone case launch ever is coming up. We leave behind our microburst office for a new building. Noah and Brian move into unused conference rooms, taking a page out of our San Francisco playbook.

We launch our Tesla Model 3 Charger in Summer 2018 We begin offsetting all of our carbon emissions related to shipping through Carbonfund.

We launch our lineup of Kevlar® cables Our team, now 25 strong, visits our new warehouse in Hong Kong and attends our factory partner's wedding in Shenzhen.

The Nomad team grows to 30 people

Everything seemed to be going well until a freak summer storm blew the roof off our office and drenched everything we had. Fortunately, we were able to move back into the family home for one last stretch and make it work. This was right when the iPhone 8 and X were launching, and the seven of us at Nomad made the living room/garage/basement combo work.

Eventually, we were able to find a great deal on a modern office with a roof, and we moved in just in time for the holiday rush. The new office became our home, literally. Noah and I lived upstairs in unused conference rooms. Some of the team at the time opted to go full Nomad and parked camper vans in the lot. We were on a roll, launching new products like the Tesla Model 3 Wireless Charger. We used the experience we gained over the previous years to upgrade the design of all of our cases, cables, and straps. However, cash was still very tight. The team was now a rockstar crew of ten. We hustled and made it happen. Somehow, and often by the skin of our teeth, we were able to keep up with the growth. It was never easy, though. Whenever things got busy, we often drew upon our early Nomad DNA, calling on our entire team to take a break from daily responsibilities to receive a shipment or get thousands of backorders out the door before a deadline.

We officially begin development of our next generation, positionless wireless charger, Base Station Pro. Meanwhile, things ramp up for our biggest holiday season ever.

We attend our 8th CES in Las Vegas We begin manufacturing and distributing PPE to healthcare professionals and essential workers in order to help fight COVID-19.

In the wake of the murder of George Floyd and resulting social justice protests, we donate masks and other PPE to community organizers and businesses in Minneapolis.

In July 2020, we launch our first iPad Cases

We look back at the past year and a half of Nomad history as we prepare to unveil the next generation of wireless chargers with Base Station Pro.

The following year we launched our Base Station family of wireless chargers. These products showcased what we had learned about design, materials, and product development since Nomad’s inception. The success of our line of wireless chargers helped propel us into a new phase as we began to think about the future of Nomad and our core product lines. We expanded our team, opened a Hong Kong warehouse, and invested our profits into R&D for our next generation of products. This year we will be launching Base Station Pro, our most significant product yet. We are so excited for this next era of Nomad. Thanks for everything. We couldn’t have done it without you! Working in the Family Home 2015 The Nomad Team 2019
Want to join us on our journey? Stay up to date with the latest from The Nomadic.
Back to The Nomadic