Dave Herring is a photographer, writer, and traveler based in Charlottesville, Virginia. This past fall he went on an extended road trip to explore one of our nation's greatest public resources: our National Parks. Dave documented his adventures in a three-part series for the Nomadic. Read below for part two of Dave's journey. If you missed part one, you can read it here.

One of my favorite aromas is the smell of a campfire. It awakens an ancient part of me. Eons ago, our ancestors sat around fires as we do today with the same orange glow on their faces and the same smokey scent stimulating their senses. The smell is nostalgic - not just for personal past experiences but also for all of humanity's past experiences. A few months ago, I threw the tent onto the old Landrover and took the family on a spontaneous camping trip not far from our home in the Blue Ridge Mountains. As we sat around the campfire on our first night, I couldn't help but wonder if the smell of the fire was burning into my children's memories. Many years from now, when they take their children camping will the campfire bring them back to this night in the mountains? 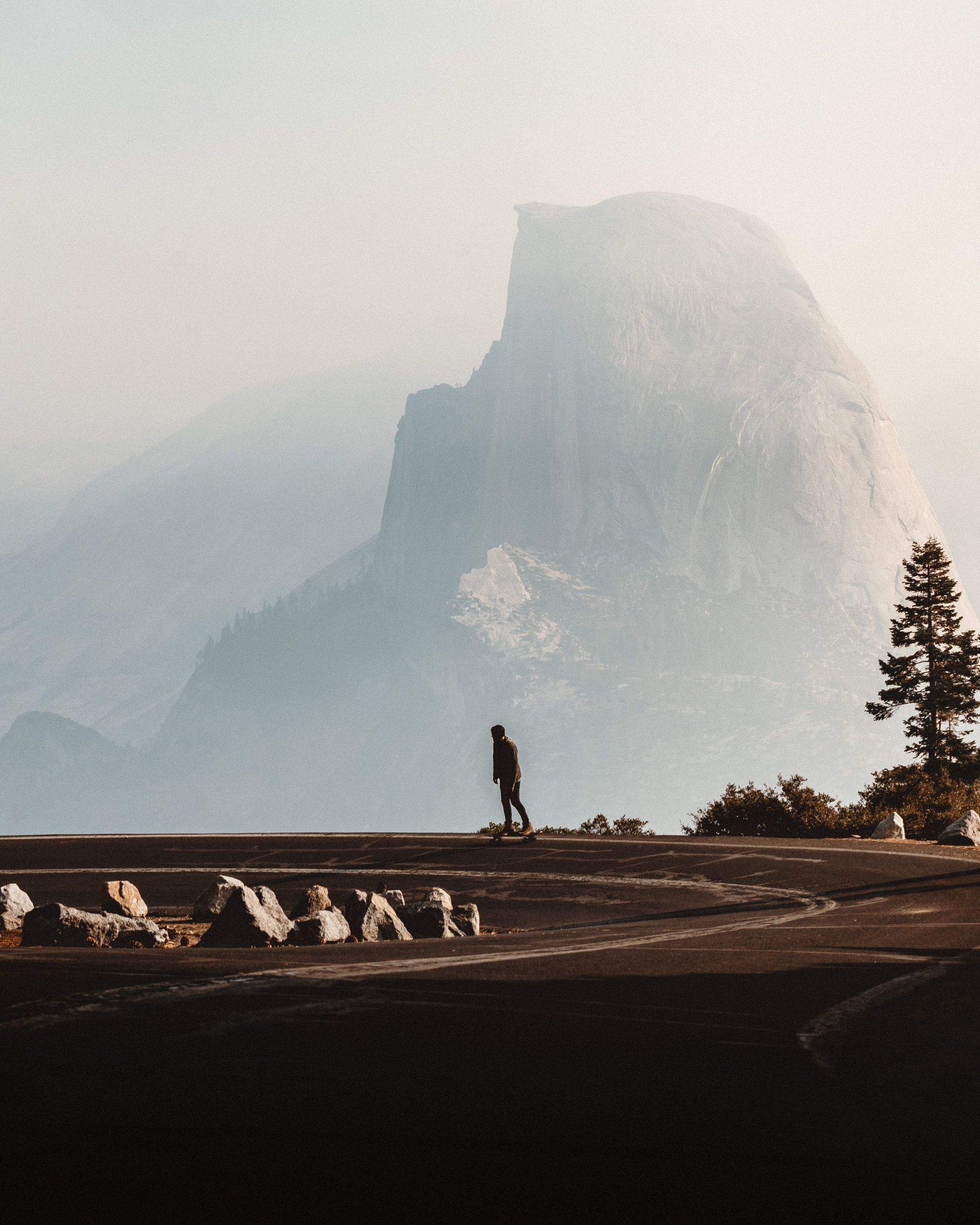 I opened my car door in Oakhurst and stepped out, stretching my back after a few days of driving from Montana to California. We had stayed in Lake Tahoe for a bit, where I destroyed my phone taking a picture underwater. I was now only relying on my Apple Watch for all communication. We were twenty days and three National Parks into our journey and we were almost to Yosemite. As I opened my car door, I was immediately taken back by the smell of smoke in the air. My brain connects this smell to camping, spending time with family and friends, eating s'mores, or just trying my best to stay warm. The smoke in the air is from the Creek Fire, one of the many tragic fires California has experienced this year. The fire impacted Yosemite, Kings Canyon, and Sequoia - three of the National Parks I was set to explore over the next two weeks. Watching the smoke and air quality in each park was part of my daily routine, and while at this point, I was hopeful, I was also unsure of what to expect. 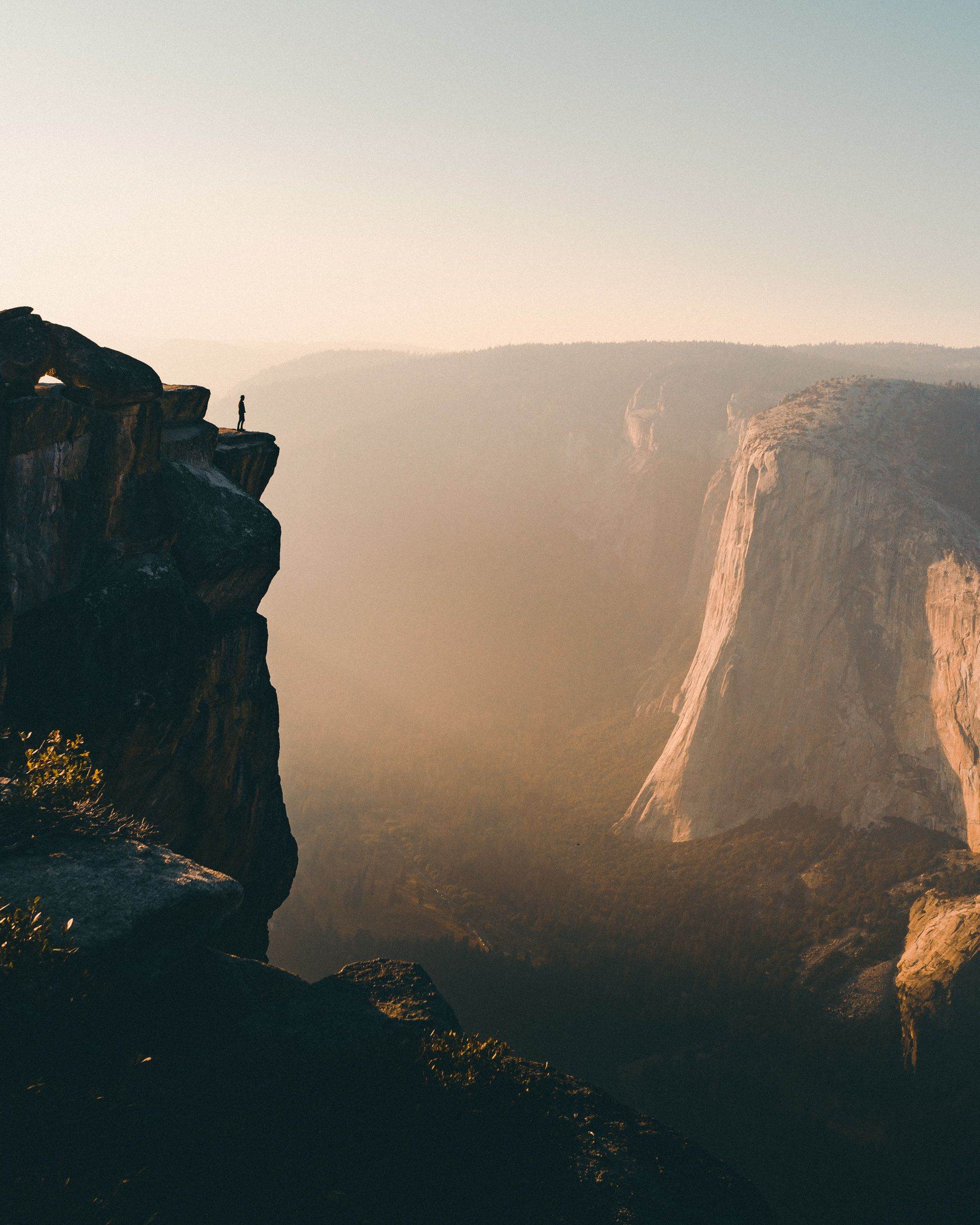 Most disappointment in life comes not through circumstances themselves, but our own unfilled expectations. My grandfather was an avid golfer, and when it came to golf, he was the most optimistic person you would ever meet. With two inches of cigar left in the corner of his mouth, he'd throw his golf clubs in his old truck and head over to hit a bucket of balls or play eighteen holes. Even if the clear sky had been hit with low pressure and the clouds darkening as a bruise, he'd still hope that it was going to pass quickly and clear up. Yet when it didn't, he just kept smiling. Smoky Views of Half Dome

If I came to Yosemite expecting clear skies for a week, I was going to be disappointed. If I wished to not have a smokeless moment less than a hundred miles from an active wildfire, why would I even waste my time and come? With both mindsets, I lose, and disappointment wins. Rather than live life disappointed, I've realized that I must embrace and accept uncertainty. Expect to be surprised. Expect to take risks. Expect to be let down as much as you expect hope. Expect pain and suffering, but also expect joy and greatness. Yes, plan for your future as diligently as possible, but give yourself space and grace for change. You need it because change is going to come. 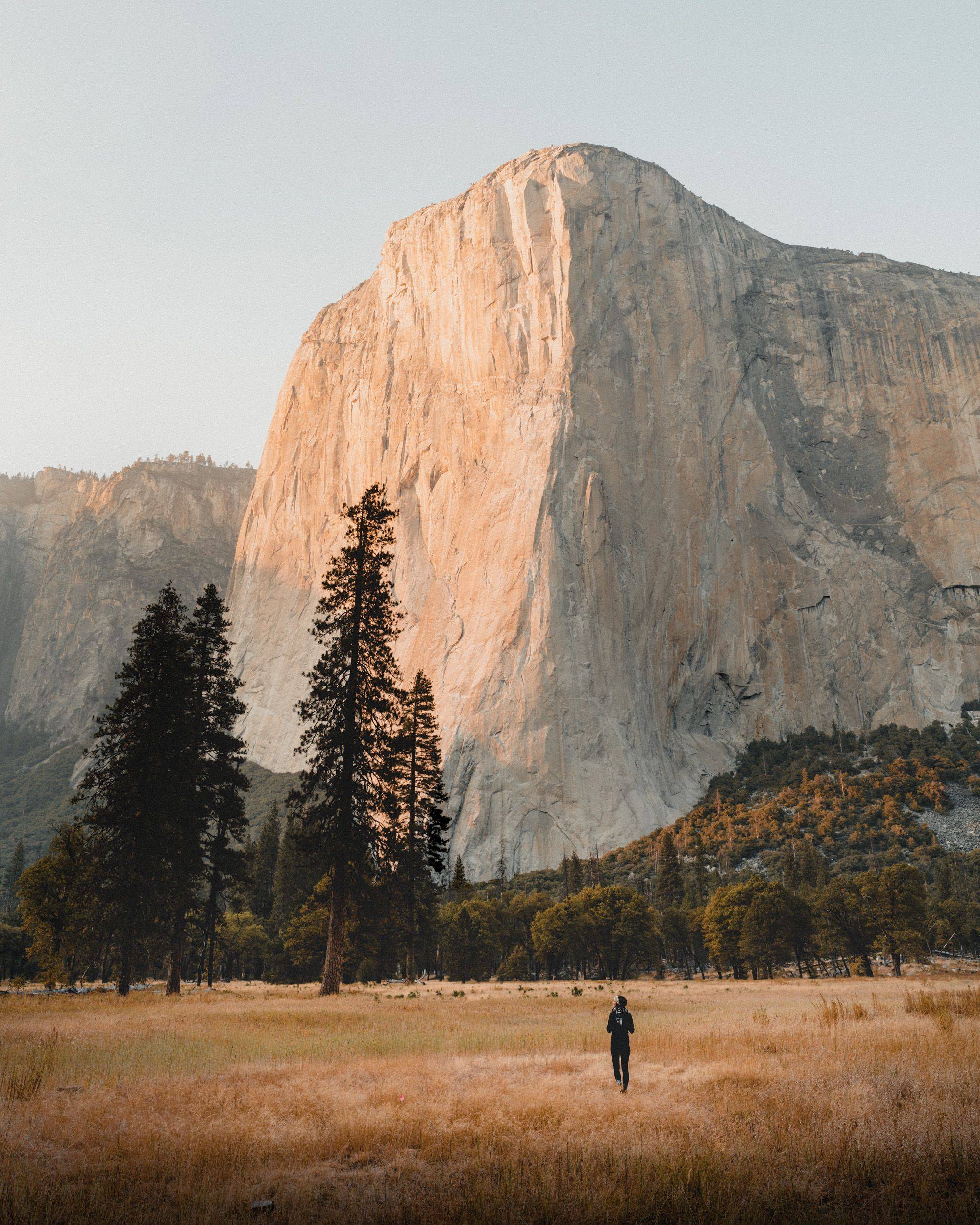 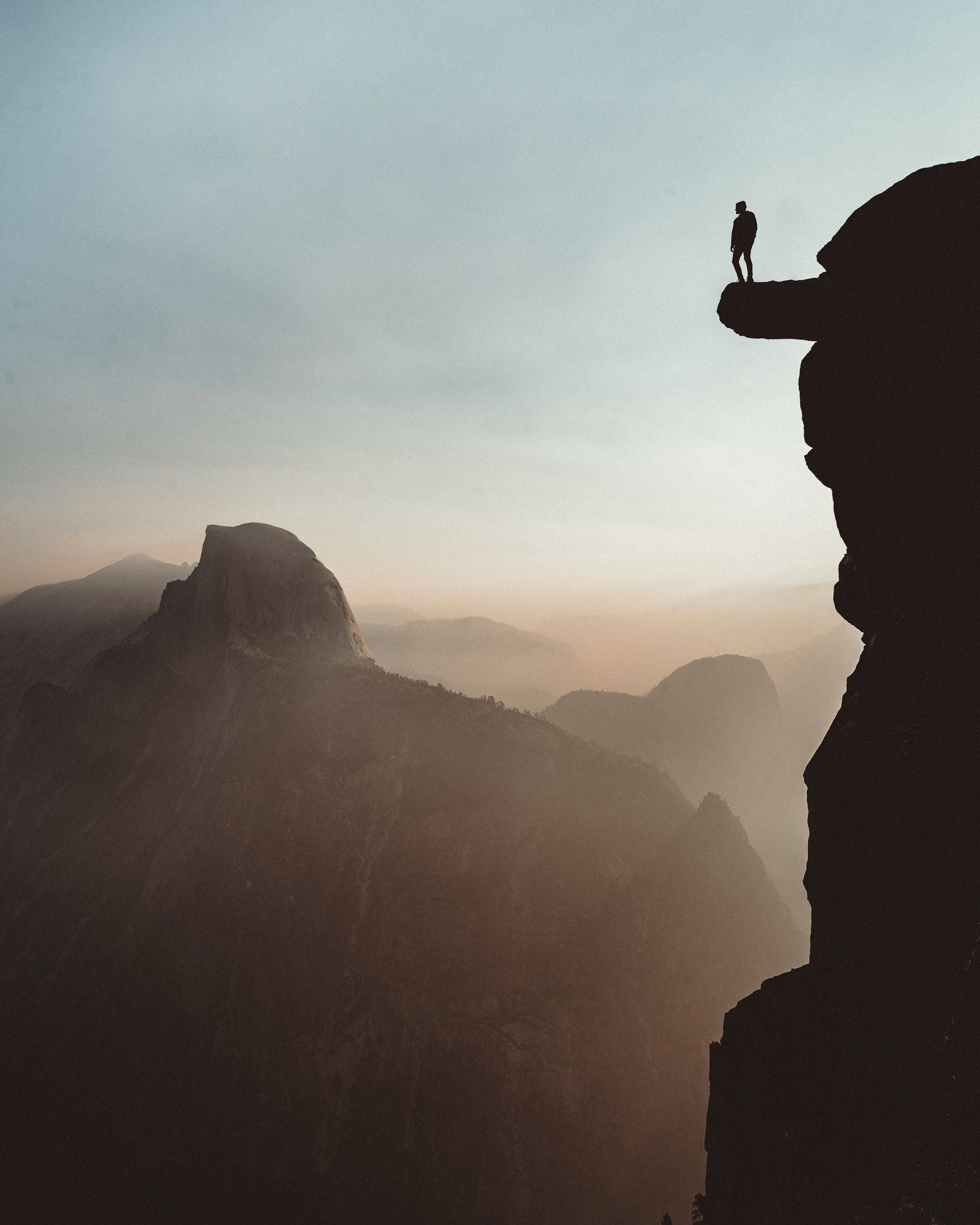 Views From the Valley

I gathered all I needed in Oakhurst and headed to Yosemite. As I entered the park from the south, the sky began to clear up a bit. And by the time I arrived at Tunnel View for sunset, the sky was completely clear. By the next day, some smoke had rolled back in, and I spent the day making most of the haze that was resting over the park like a blanket. I met some people in the park the night before at Tunnel View, and we met for sunrise at Glacier Point. I took my longboard and cruised the bend in the road for that epic and cliche photo Instagram salivates for. I hiked to Taft Point and stood on the edge of a rock looking thousands of feet below me, only a gust of wind or an unsteady step away from death. I chased my children around the valley floor while light came down into the meadow and the waterfalls cascaded down.

As quickly as the smoke had arrived, it was gone. I repeated all I had done before but now with clear skies, experiencing a totally different sunrise and sunset. It's incredible how even the slightest change to circumstances can make our experiences vastly different. 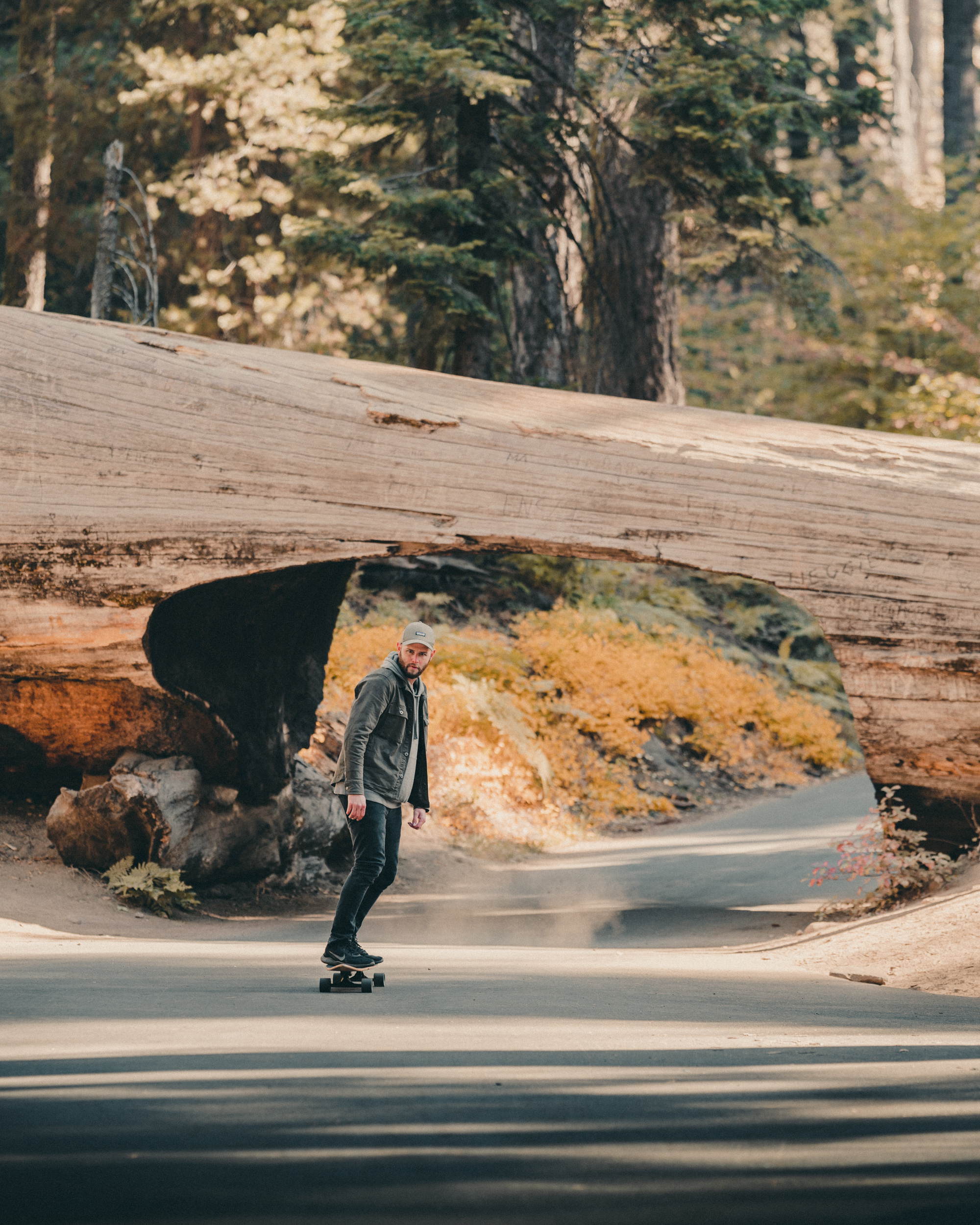 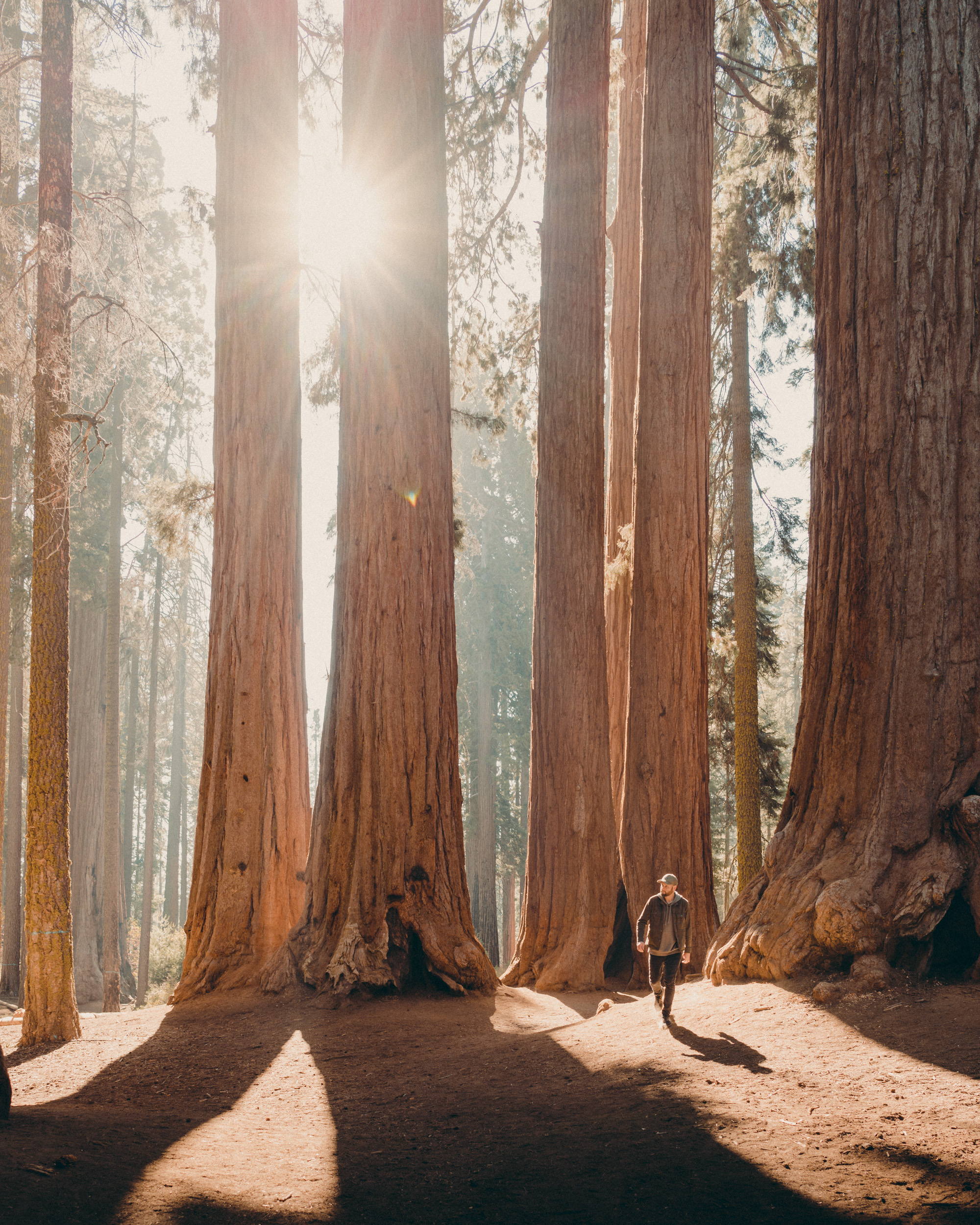 After one of the most incredible weeks of my life exploring Yosemite, we were on the road again, winding through the Sierra Nevadas. We arrived at Kings Canyon and Sequoia and began to walk amongst the giants, the ancient General's that tower over the forest. We had built these trees up to the children for some time, explaining to them that they were the biggest trees in the world. Years ago, my wife and I hiked Redwoods National and State Park on California's northern coast when my son was two. Today he's six, and of course, has no memory of the redwoods we trekked through four years ago. But he will remember these giant sequoias. As we approached General Grant, his eyes were wide as we gazed at this enormous tree. Our two-year-old daughter stood with him, playing in the dirt.

"Is it as big as we said it was? Is it what you were expecting?" we asked.

Read Part 1 of Dave's Journey Here
Want to join us on our journey? Stay up to date with the latest from The Nomadic.
Back to The Nomadic